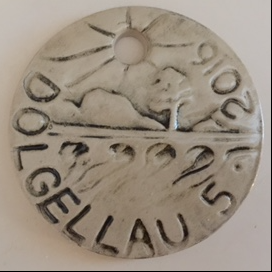 Phew! I had a whole night’s sleep last night for the first time in a good while. The medallions are done and dusted!

I’ve had a frantic and full time week making memnetos/ medallions for the Dolgellau 5 mile race after a very late in the day agreement to take on this commision.

It’s been a fabulous hands on opportunity to learn about production. I have had to research all sorts – thank you Google and Potterycrafts in particular. My little hobby kiln has been working overtime.

I started by making an original in clay that I already had. I made three and iscuit fired them to make a stamp but none really came up to the mark….. So I tried again. Here’s my beauty! The stamp from this original worked fine and the next challenege was to find a good way of cutting out and printing the medallions.

I ended up rolling out the clay for each medallion separately with a newly purchased baking cutter purchased from a lovely shop in Abergavenny.( Getting a cutter big enough was not easy and the original metal one I bought wasn’t quite circular and had a join.)  I let the rolled clay dry out a bit between bisque fired tiles before stamping and cutting to shape. Cutting out the sun for to make the hole was achieved using a large icing nozzle purchased from the lovely hardware/ kitchen equipment store in Dolgelau.

My first batch of medallions was made from some Stoneware body from Potclays that I had already. These worked ok but the clay was a bit rough to take the stamp as well as I had hoped. The clay I purchased was Potters choice extra smooth from Potterycrafts which specified suitability for stamp work and little warping etc. It worked a treat and as a member of North Wales Potters I got a 10% discount. The new clay arrived a little over a week before the race!!! 100 medallions to go!

The medallions had to be dried in a hurry which was obviously a worry so I used the oven at 95oc as well as the top of the kiln and in the kiln for drying – all a bit of a gamble!

After a bisque firing (200oC to 600oC and 100oC to 1000oC) I applied iron oxide and then a light touch of a transparent lead free gloss glaze from Potterycrafts. I’ve made some glazes myself but did not have anything I could trust to do the job. I also bought a matt transparent glaze which is lovely but didn’t come out transparent from a firing to 1200. I did a test firing of the newly acquired glazes in a hurry (they arrived with the clay) so I was pretty sure I had hit on a formula that would work but was on tenterhooks to see if it had worked.

Withe the fast encroaching deadline I researched glaze firing programs and settled on the fastest I thought would work. (150oC to 600oC and 250oC to 1200oC and a 1 hour soak). 1200oC was the lowest temperature specified for the glaze. I calculated that there was just enough time to complete all the firings before race start with 36 medallions in each firing but I hadn’t considered how much my little kiln would struggle with the high temperatures so instead of the expected 7 hours to cool down it took 13! Live and learn.

Picking up tips from ceramics forums on Google I really pushed it with the cooling and hope no cracking or worse would occur. I opened the door and window of my studio for  through draft and set a fan going. At 700oC I removed the plugs, at 600oC I opened and propped open the lidto 1cm. At 500oC the opening was increased to about 6cm and at 400oC to 10cm. At 200oC I opened and emptied the kiln and repacked it. The cooling took 4-5 hours. Not bad!!

However, I realised I wasn’t going

to get all the firings done which took off the pressure a little as it just wasn’t going to happen. I was hoping to m
ake 120 medallions although in the previous year there were only 80 entries. I would have 108 cooked by 12 with the start of the race at 1pm! If we needed more we would just have to post them out after the race.

It turned out that we had 99 runners so all was well and the medallions were very well received. I have fired the last batch and these can de distributed amongst the marshalls and other volunteers.

Next year, if I do this again, I will start a little earlier!!

This site uses Akismet to reduce spam. Learn how your comment data is processed.

Cart
Siop 1, Maldwyn House
Dolgellau
LL40 1RF
07588835604
dipsydragondolgellau@gmail.com
Our studio is closed for now
Instagram
4 large hares ready to glaze - what colour will they be!
My acropolis glaze does odd things sometimes - gives the hare character and originality perhaps!
3 new hares out of the kiln- 2 medium (£35) with detail and a clear glaze and 1 small (£30) with a new cream glaze. There are 4 large (£50) ready for glazing so get your orders in!
We've just got our hands on some more of the wonderful original artwork cards from this month's guest artist, Louisa Graham. For sale only at 'Dipsy Dragon'; just £6 each.
Loading Comments...
Comment
×
%d bloggers like this: